The story of an ant | Motivational Stories
≡ Menu

The story of an ant

by Stephen on July 16, 2012
in Inspirational Stories

One morning I wasted nearly an hour watching a tiny ant carry a huge feather across my back terrace. Several times it was confronted by obstacles in its path and after a momentary pause it would make the necessary detour. At one point the ant had to negotiate a crack in the concrete about 10mm wide. After brief contemplation the ant laid the feather over the crack, walked across it and picked up the feather on the other side then continued on its way.

I was fascinated by the ingenuity of this ant, one of God’s smallest creatures. It served to reinforce the miracle of creation. Here was a minute insect, lacking in size yet equipped with a brain to reason, explore, discover and overcome. But this ant, like the two-legged co-residents of this planet, also shares human failings. After some time the ant finally reached its destination – a flower bed at the end of the terrace and a small hole that was the entrance to its underground home. And it was here that the ant finally met its match. How could that large feather possibly fit down that small hole? Of course it couldn’t. So the ant, after all this trouble and exercising great ingenuity, overcoming problems all along the way, just abandoned the feather and went home.

The ant had not thought the problem through before it began its epic journey and in the end the feather was nothing more than a burden. Isn’t life like that! We worry about our family, we worry about money or the lack of it, we worry about work, about where we live, about all sorts of things. These are all burdens – the things we pick up along life’s path and lug them around the obstacles and over the crevasses that life will bring, only to find that at the destination they are useless and we can’t take them with us. 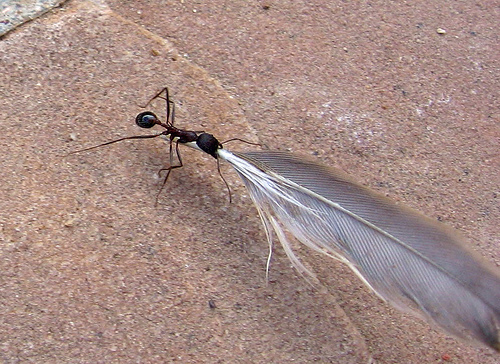