The Power Of Mother’s Love

by Stephen on August 21, 2013
in Inspiring Stories

This story is a little long but well worth the time to read. It perfectly illustrates not only the amazing power of Love, but also the truly inspiring power of Touch.

When doctors told Carolyn Isbister that her tiny premature daughter would die within 20 minutes, she had to prepare herself for the worst.

Tiny Rachael had just been born minutes before, weighing just 1.4lb (0.64kg), and her heart was only beating once every ten seconds. But Miss Isbister was determined to have just one cuddle with her daughter and to savor the one precious moment she had, so she picked up tiny Rachael and cuddled her close.

And it was a cuddle that has amazed doctors by saving the baby’s life. The warmth of her mother’s skin actually kickstarted Rachael’s heart into beating properly, which allowed her to take tiny breaths of her own.

Four months later – the baby who was so tiny that the doctors gave up on her life – has been allowed home, thanks to that precious life saving cuddle from her mother.

Miss Isbister, 36, from West Lothian, said: “Rachael has been such a little fighter – it is a miracle that she is here at all. When she was born the doctors told us that she would die within 20 minutes because her heart wasn’t beating properly and she wasn’t breathing. But that one precious cuddle saved her life. I’ll never forget it.”

Miss Isbister, a chemist, and her partner David Elliott, 35, an electronic engineer, were thrilled when she fell pregnant. At the 20 week scan at the Edinburgh Royal Infirmary, doctors told them that she was carrying a girl and they decided to name her Rachael. But at 24 weeks, Miss Isbister went into premature labour after she developed an infection in her womb.

Miss Isbister, who also has two children Samuel, 10, and Kirsten, 8, from a previous marriage, said: “We were just terrified we were going to lose her. I had been bleeding throughout the pregnancy, and had suffered three miscarriages before falling pregnant with Rachael, so we really didn’t think there was much hope.”

When Rachael was born, weighing 1.4lb, doctors told the couple that their daughter would only live for 20 minutes. She wasn’t breathing and she was grey and lifeless. Her heart was only beating once every 10 seconds.

Miss Isbister said: “The doctor just took one look at her and said no. They didn’t even try to help her with her breathing as they said it would just prolong her dying. Everyone just gave up on her.”

The doctors told the couple to say their goodbyes to their daughter, but Miss Isbister decided that she would give her daughter the only cuddle she would ever have. So she lifted her out of her hospital blanket and placed her on her chest, with skin to skin contact.

She said: “I didn’t want her die being cold. So I lifted her out of her blanket and put against my skin to warm her up. Her feet were so cold. It was the only cuddle I was going to have with her, so I wanted to remember the moment.”

But after 20 minutes tiny Rachael was still alive. Then a miracle happened. She started taking tiny breaths on her own, and her heart started beating more regularly.

Miss Isbister said: “We couldn’t believe it – and neither could the doctors. She let out a tiny cry. When she was still breathing after four hours and her heart was beating more regularly, the doctors came in and said there was still no hope for her, but I still wasn’t letting go of her. We had her blessed by the hospital chaplain, and waited for her to slip away. But she still hung on. And then amazingly the pink color began to return to her cheeks. She literally was turning from grey to pink before our eyes, and she began to warm up too.”

After 48 hours, the doctors decided to put her on a ventilator to help with her breathing and she was transferred to the intensive care unit.

Miss Isbister said: “The doctors said that she had proved she was a fighter and that she now deserved some intensive care as there was some hope. She had done it all on her own – without any medical intervention or drugs. She had clung onto life – and it was all because of that cuddle. It had warmed up her body enough for her to start fighting.”

Because Rachel hadn’t had any oxygen for four hours, doctors warned the couple that there was a high risk she had been brain damaged. But a scan showed no evidence of any damage at all.

As the days passed, Rachael slowly began to gain in strength and put on weight. She had laser treatment on her eyes to save her sight as the blood vessels hadn’t had chance to develop properly in the womb. And she also had six blood transfusions.

Miss Isbister added: “We couldn’t believe that she was doing so well. Her heart rate and breathing would suddenly sometimes drop without warning, but she just got stronger and stronger.”

After five weeks she was taken off the ventilator and Miss Isbister was able to hold and breastfeed her. Then after four months in hospital, they were finally allowed to take her home – a day which they never thought they would see.

Miss Isbister said: “She is doing so well. When we finally brought her home, the doctors told us that she was a remarkable little girl. And most of all, she just loves her cuddles. She will sleep for hours, just curled into my chest. It was that first cuddle which saved her life – and I’m just so glad I trusted my instinct and picked her up when I did. Otherwise she wouldn’t be here today.” 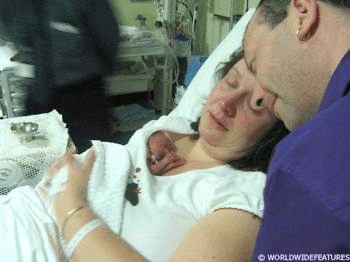 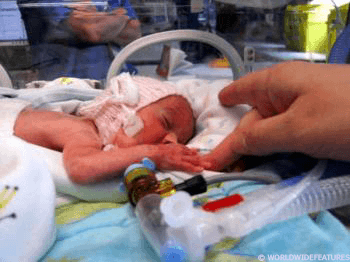 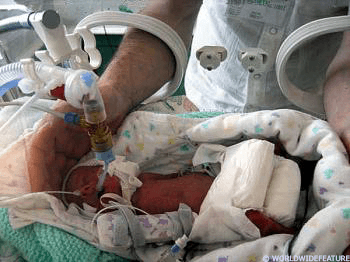 Next post: Salt, Glass of Water and the Lake