by Stephen on November 5, 2012
in Inspiring Quotes 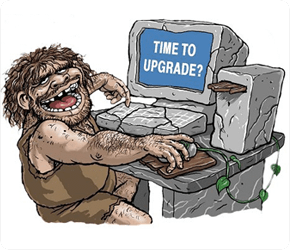 “I am going to call my kids Ctrl, Alt and Delete. Then if they muck up I will just hit them all at once.”
Author Unknown

“A computer once beat me at chess, but it was no match for me at kick boxing.”
Emo Philips

“By the time a man realizes that his father was right, he has a son who thinks he’s wrong.”
Charles Wadsworth

“The quickest way to double your money is to fold it over and put it back in your pocket.”
Will Rogers

“A day without sunshine is like, you know, night.”
Steve Martin

“A lot of people are afraid of heights. Not me, I’m afraid of widths.”
Steven Wright

“Housework can’t kill you, but why take a chance?”
Phyllis Diller

“A stockbroker urged me to buy a stock that would triple its value every year. I told him, ‘At my age, I don’t even buy green bananas.'”
Claude Pepper

“My most brilliant achievement was my ability to be able to persuade my wife to marry me.”
Winston Churchill

“The only time a woman really succeeds in changing a man is when he is a baby.”
Natalie Wood

“I would never die for my beliefs because I might be wrong.”
Bertrand Russell

“I never drink water because of the disgusting things that fish do in it.”
W. C. Fields

“Originality is the fine art of remembering what you hear but forgetting where you heard it.”
Laurence J. Peter

“A woman’s mind is cleaner than a man’s: She changes it more often.”
Oliver Herford

“Why do they call it rush hour when nothing moves?”
Robin Williams

“My uncle Sammy was an angry man. He had printed on his tombstone: ‘What are you looking at?'”
Margaret Smith

“If at first you don’t succeed, find out if the loser gets anything.”
William Lyon Phelps

“Mail your packages early so the post office can lose them in time for Christmas.”
Johnny Carson

“If you die in an elevator, be sure to push the up button.”
Sam Levenson

“If you think nobody cares if you’re alive, try missing a couple of payments.”
Earl Wilson

“A bank is a place that will lend you money if you can prove that you don’t need it.”
Bob Hope

“The human brain is a wonderful thing. It starts working the moment you are born, and never stops until you stand up to speak in public.”
George Jessel

“Marriage is a relationship in which one person is always right and the other is the husband!”
Author Unknown