A man must constantly exceed his level!

by Stephen on October 28, 2011
in Inspirational Stories

This inspiring story is about Bruce Lee, a legendary martial art master.

“Bruce had me up to three miles a day, really at a good pace. We’d run the three miles in twenty-one or twenty-two minutes. Just under eight minutes a mile [Note: when running on his own in 1968, Lee would get his time down to six-and-a half minutes per mile].

So this morning he said to me “We’re going to go five.” I said, “Bruce, I can’t go five. I’m a helluva lot older than you are, and I can’t do five.” He said, “When we get to three, we’ll shift gears and it’s only two more and you’ll do it.” 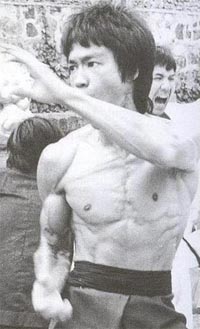 I said “Okay, hell, I’ll go for it.” So we get to three, we go into the fourth mile and I’m okay for three or four minutes, and then I really begin to give out. I’m tired, my heart’s pounding, I can’t go any more and so I say to him, “Bruce if I run any more,” –and we’re still running-” if I run any more I’m liable to have a heart attack and die.”

He said, “Then die.” It made me so mad that I went the full five miles.

Afterward I went to the shower and then I wanted to talk to him about it. I said, you know, “Why did you say that?”

He said, “Because you might as well be dead. Seriously, if you always put limits on what you can do, physical or anything else, it’ll spread over into the rest of your life. It’ll spread into your work, into your morality, into your entire being. There are no limits. There are plateaus, but you must not stay there, you must go beyond them. If it kills you, it kills you. A man must constantly exceed his level.”

From The Art of Expressing the Human Body
By Bruce Lee, John Little